The following article was prepared for LeapRate by ATFX’s market analysts.

Alibaba after a strong earnings report in November plans to issue 500 million new shares plus an additional 75 million “greenshoe” option next week. The greenshoe gives the underwriters the ability to sell more stocks than the original amount set, of those 500 million shares, the 50 million shares will be sold to retail investors. BABA said those retail shares will be priced at no more than 188 HK. The offer price for both the international and the Hong Kong public offering has been set at HK$176 per share. BABA’s Hong Kong listing will be the largest stock offering across the globe for 2019.

The BABA stock price performance has run an impressive rebound since the June lows and registering 22% gains for the year, while the S&P 500 is gaining 23% the same period.

BABA beat market consensus expectations in the November earnings report. Revenue was RMB119,017 million (US$16,651 million), an increase of 40% year-over-year. The Annual active consumers on the China retail marketplaces reached 693 million, an increase of 19 million from the 12 months ended June 30, 2019.

BABA Cloud computing revenue increased by 64% (YoY) to RMB9,291 million (US$1,300 million) during the September quarter, driven by an increase in average revenue per customer. As of August 4th 2019, 59% of companies listed in China are customers of Alibaba Cloud.

Despite the trade tensions between US and China, BABA managed to avoid damage in the bottom line as it’s wide diversification helps the company to preserve the revenues and earnings. Alibaba has rolled out various services aiming to eliminate the trade war impact on its bottom line.

Alibaba stock trades at 22.37 P/E making the BABA stock attractive against its competitors, BABA’s Enterprise Value to EBITDA is 28.70, compare this to Amazon’s 26.07. This makes Alibaba stock cheap on a P/E basis, but slightly overvalued on an EV/EBITDA basis.

On the technical analysis side, the picture is bullish as BABA is trading above all the major daily moving averages and continues above the ascending trendline which started in January 2019. Traders now focus to the upside, where immediate resistance for BABA stands at $186.89 the top from November, while if the stock breaks above that level, the next target will be the resistance at 188.40 which is the high from November 8th before an attempt to yearly highs. 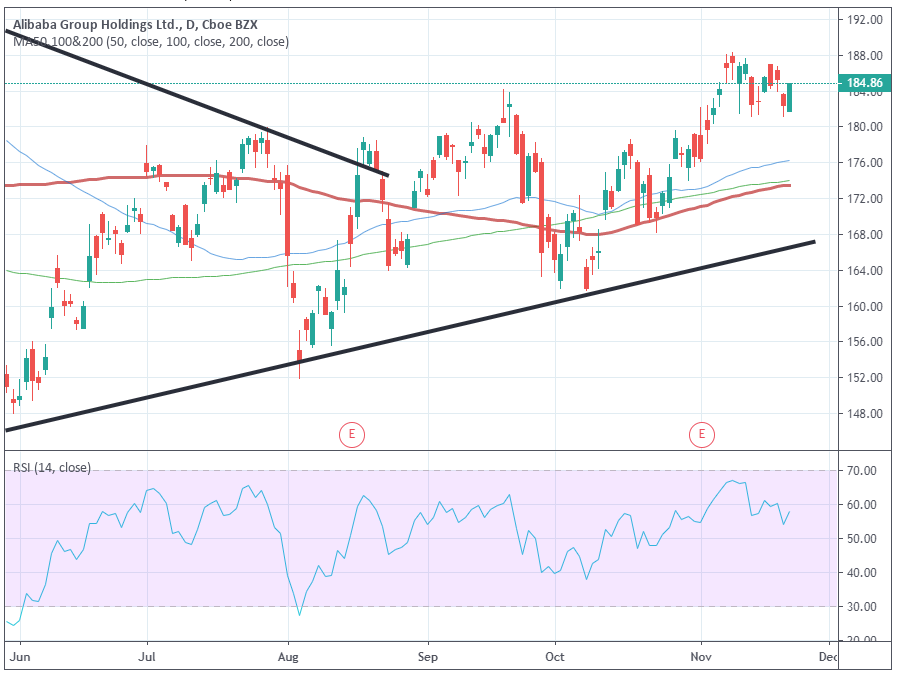 The post Alibaba close to five-month highs ahead of 2019 largest stock offering appeared first on LeapRate.